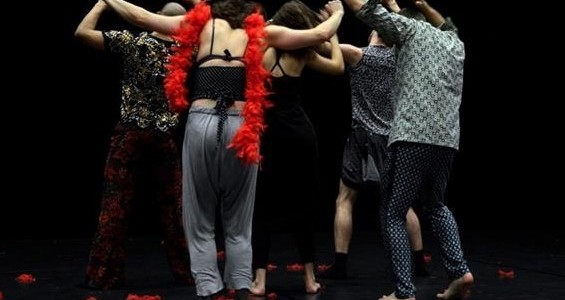 TOYS is the morning with a hangover. It is the game, the absolute, the disguise of tragedy behind the constant of celebration.

The theatre of the Absurd and the aesthetic of Dance-Theatre are the inspirations accompanying the creation of the work, in both its choreographic and dramaturgic approaches. The performance will depict a journey from the exhaustion of the senses to the clarity of the mind.

Lea started the research for her new piece TOYS last year during Choreodrome at The Place. The development for the piece is continuing and she will be working in different European countries (Finland at the Oulu Dance Centre, France at the CDC Grenoble, Luxembourg at the TROIS C-L, Belgium at the Grand Studio de Bruxelles and England at TripSpace). Each session will lead to an open rehearsal or a showing of the work in progress. The piece will open on the 3rd of February 2017 in Luxembourg (Banannefabrik).

Lea holds a BA in History of Art and in Modern Literature, and a Certificate of Higher Education from The Place.
Since she graduated, she has worked as a dancer with José Vidal, Clod Ensemble, Seke Chimutengwende, James Finnemore, Seven Sisters Group, Jean-Guillaume Weis and Peter Groom. For two seasons she has worked with the Tanztheater Kassel, Germany, under the direction of Johannes Wieland, where she danced with Johannes Wieland, Michael Langeneckert, Stephanie Thiersch and Chris Haring/Liquid Loft. Her work has been performed in England, Germany, Spain and Luxembourg.

Her latest piece ‘Love Me Tender’ has been listed in Graham Watts’ annual dance review in the category “Emerging Talent”. This piece will also be performed during the prestigious TanzMesse next August (Tanshauz, Düsseldorf).

The theatre of the Absurd, the aesthetic of Dance-Theatre and pop culture are her main inspirations.