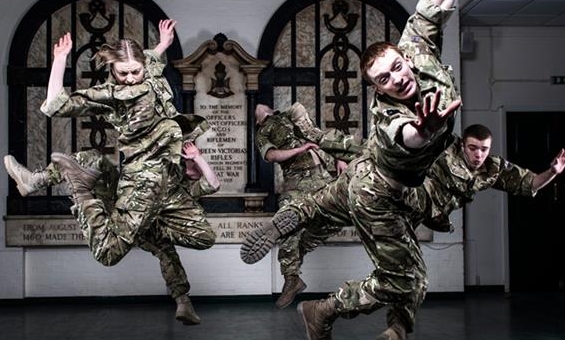 Dates:
Sat 16 May 2015 8:00pm
Running time: 1 hour (no interval)
Age: 12+ Parental guidance advised, contains some scenes of violence.
Tickets: £12.50
£6.00 students,
£9.50 concession
About
Rosie Kay Dance Company returns to Dance City with a work of sublime emotion and beauty, a visceral 'tour de force' of the senses. '5 SOLDIERS' provides an intimate view of the training that prepares our soldiers for the sheer physicality of combat and the impact conflict has on the bodies and minds of everyone it touches.

5 SOLDIERS delivers Kay’s trademark style of intense physical and athletic dance theatre. The work received audience and critical acclaim in 2010 and 2011, and has been endorsed as ‘getting it’ by its military audiences.

The Observer ?????
"...War from a female perspective packs a punch" The Observer
“... Astonishing work...It’s highly charged and it screams authenticity. Awesome.” The Stage
“I am a former Green Jacket soldier... I found the performance deeply moving, relevant and so representative of how soldiers are and how they cope with the contrasting aspects of their lives.“ Audience Member

The piece has a powerful physicality, moments of humour and is full of honesty, all inspired by input from serving and former soldiers.

Kay is one the world’s leading female choreographers with a reputation for making strong, intelligent work that tackles interesting subjects with exciting collaborations. In 2012 the company was nominated as Best Independent Dance Company by the National Dance Awards, Critics Circle.

This is no ordinary UK tour. The partnerships between theatres, military bases, Army Welfare Services, local communities and the company, makes this the first of its kind in the UK.

Join us for a short pre-show performance by South Tyneside Young Carers Association and young people who live in Albemarle Barracks with a parent serving in the Army. The groups have worked with Dance Artist Nadia Iftkhar to create this new piece of work influenced and inspired by 5 SOLDIERS.