Hope Hunt and the Ascension into Lazarus - Oona Doherty 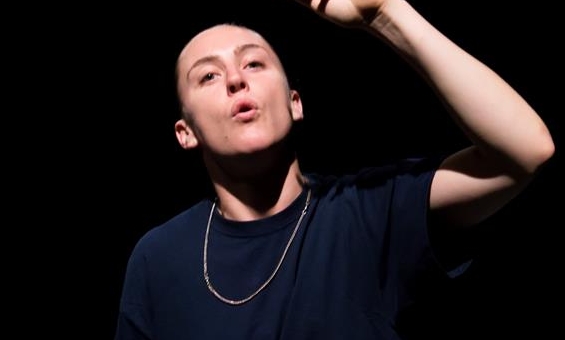 Dates:
Fri 06 Jul 2018 7:30pm
Running time: approx 1 hour
Age: All - does contain strong language
Tickets: £13.50
£8.00 students,
£11.00 concession
About
This is thumping sweaty dance-theatre; a physical expression of the place between the flesh and the soul. Heaving lungs shout in the dark as Doherty takes you through a dirty Europe, from the dark and into the light like a bursting lightbulb. The show explores the experience and feelings of growing up white, male and disadvantaged.

Awards and Accolades for Hope Hunt and the Ascension to Lazarus:

Edinburgh dance review: Hope Hunt and the Ascension into Lazarus

Oona Doherty gives an intelligent, raw and yet meticulously detailed performance, full of sharp body language. The title of this stunning solo by the Belfast-based performer and choreographer Oona Doherty is a mite unwieldy, but the work emphatically is not. There isn’t a wasted moment in Doherty’s 40-minute potent, impressionistic dance-theatre treatment of what she refers to as “the male disadvantaged stereotype”. It’s riveting and moving, and she’s a simply phenomenal performer.

It isn’t strictly a solo, nor is the piece entirely set indoors. It begins outside with — spoiler alert — a compact red car driven close to the venue entrance by a tough-looking young man (Aaron Hickland). A speaker in the back blares heavy, clubby beats. He opens the hatch and out tumbles Doherty. Hair slicked back and in baggy, nondescript street clothes, she proceeds to dance in a hip-hop style while lightly, loosely, interacting with the audience. After five minutes she urges us into the theatre.

I say she, but Doherty’s behaviour and garb carry strong masculine overtones. With a finger she quickly mimes drawing a moustache on her face. It’s a raw, switched-on, fragmented and yet meticulously detailed performance, swift and clear and full of sharp body language underpinned by a blistering, intuitive intelligence. In an upstage corner is a big pile of junk food detritus. Otherwise the stage is bare. Doherty roves purposefully about it, initially speaking with a German accent (and name-dropping the pioneering 20th-century installation artist Kurt Schwitters, presumably a personal homage), but soon shifting into Irish intonations. She breathes hard and rhythmically while morphing a carefully chosen collage of words into new shapes and sounds. Her persona is cocky, then vulnerable and breathtakingly quick-change.

In the final section everything becomes bright, with Doherty in white and a soundtrack of soothing Renaissance music overlaid by the voices of people arguing violently. Painful yet mysteriously redemptive, Hope Hunt & the Ascension Into Lazarus left me shaken and stirred.
Share: