Made In The North East Commission Recipient Announced - Dance City

Made In The North East Commission Recipient Announced

Dance City is thrilled to announce the recipient of our £25,000 ‘Made In The North East’ (MITNE) commission. It will be Rendez-Vous Dance with The Monocle.

This is the first MITNE commission by a consortium of nine North East venues who together will support the creation of new work and a region-wide tour. Rendez-Vous Dance was established in 2019 by award-winning choreographer Mathieu Geffré, who now lives in Newcastle. During his 15-year career as a performer he collaborated with some of the most celebrated artists in the world including Itzik Galili, Christopher Bruce, Didy Veldman, Angelin Preljocaj and Johann Inger.

Rendez-Vous Dance creates projects to tell past and present stories of LGBTQ+ communities. The Monocle, a brand-new piece is inspired by the secretly notorious 1930’s Parisian lesbian club Le Monocle and will be performed by seven dancers who identify as female or non-binary.

“I feel absolutely elated to have been offered the Made In the North East commission. Firstly, I would like to particularly thank the commission panel, the consortium of venues and the Esmée Fairbairn Foundation for choosing my project to champion dance in the North East.

“After investing energy in developing work and relationships in the region for the past four years, I fully acknowledge with great humility the privilege I now have to be able to project myself in a new creative adventure which I wish to be ambitious, collaborative and people-oriented.”

The commission opportunity was offered exclusively to dance and physical theatre artists and companies based in the North East, who were able to demonstrate a commitment to building the long term dance ecology of the region.

“We are thrilled to be announcing the recipient of a Made In The North East commission. The panel were incredibly impressed by the quality of applications, which proved a testament to the talent working in the region. The panel concluded Rendez-Vous Dance’s The Monocle was to be awarded the commission for its well-planned, presented and engaging proposal.

“Conceived as an entertaining and immersive experience involving dance and live music, The Monocle promises to be a fun performance articulating themes of pride, gender fluidity and rebellion.

“We want the North East to be a place where world class dance is made. With the support of Esmée Fairburn Foundation we have created this strategic partnership project to share, diversify and develop programming quality professional dance into more places and spaces in the region, giving confidence and deeper insight for venues, audiences and artists about the process of producing and touring dance work.”

Supported by The Esmée Fairbairn Foundation the consortium’s collective ambition is to make a world class piece of work with national significance, made in the North East.

“We are delighted to be part of the ‘MITNE’ regional partnership and to have jointly commissioned a new dance production from rising choreographer, Mathieu Geffré, for the region.

“We are very excited to be opening the city’s new venue, The Fire Station, later in the year and thrilled to be able to host the premiere of The Monocle which promises to be a highly original and entertaining dance performance.”

“Mathieu Geffré’s concept for The Monocle is highly original. This will be more than a dance work, it will be a total experience for the audience from the moment they enter the venue. I can’t wait to be part of the world he’ll create, to be drawn into the atmosphere, to be emersed in his story-telling.”

About Made In The North East (MITNE)

‘Made in the North East’ is the first commission of its kind, combining the forces of nine North East venues to offer a fee of £25,000 to support the creation of a new work and a region wide tour. Partner venues are:

The commission aims for the partners to develop a better understanding and commitment to programming dance performances in the region. To achieve this the partners are participating in a collective process of development and training activities to best enable the production of new work and touring support through a consortium approach.

Rendez-Vous Dance’s The Monocle will begin creation between May 2021 – January 2022, with a tour taking place in Spring 2022. 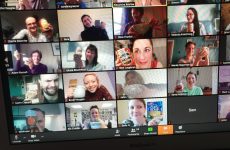