Fleur Darkin, creator of Velvet Petal  was appointed Artistic Director of Scottish Dance Theatre in Autumn 2012 and and led the company for six years before her departure in November 2018. Under Fleur’s direction the company toured works around the UK and to Brazil, China, India, Mexico, Korea, and many European countries. Formerly Artistic Director/CEO of Darkin Ensemble and Associate Artist at Bristol Old Vic, Darkin trained at Bretton Hall, NYU, was resident at P.A.R.T.S (Belgium) and graduated with a Masters
from Leeds.

Fleur has won and been nominated for a number of awards (Jardin D’Europe, Jerwood, The Place Prize) and her recent commissions include Danza Contemporánea de Cuba (Havana), Royal Court Theatre (London), Shakespeare’s Globe (London), Abbey Theatre (Dublin). Her full length-work, Miann (2014), was Linbury Trust-awarded and commissioned by Glasgow 2014 Cultural Programme and toured Brazil and Mexico to standing ovations. Her children’s work Innocence achieved its 100th performance on a  recent tour to Thailand.

Velvet Petal was created during Fleur’s fantastic six years as Scottish Dance Theatre’s Artistic Director and Velvet Petal has grown into one of the company’s most iconic pieces, a clear audience favourite at home and on the road. Inspired by the life-cycle of the monarch butterfly and Robert Mapplethorpe’s Polaroids, Velvet Petal is set to a fresh dance-punk score arranged by Torben Lars Sylvest including music by LCD Soundsystem, Spoek Mathambo, and Four Tet.

“Velvet Petal is about change – how humans change by themselves or through relationships with others. It’s about those times in your life when you must transform yourself. I spent a lot of time researching the photographic process and the Polaroids of Robert Mapplethorpe-inspired me to see things in a new way. We think we understand at first glance but actually, it’s when we spend time letting the object communicate with us that the magic happens. I think the revealing nature of time is particularly true of dancers. The dancers are the Velvet Petals and they open themselves towards the light and dig deep to pull us through the darkness.”

Darkin’s choreography has been described as ‘powerful and disturbing’ (The Stage), ‘always inventive’ (Telegraph) and as ‘politics comes to life in the body’ (New Statesman). Scottish Dance Theatre premiered Velvet Petal at Festival Internacional Cervantino (Mexico) in 2016 and Tramway (Glasgow) in May 2017 and will be arriving at Dance City on March 16 2019. 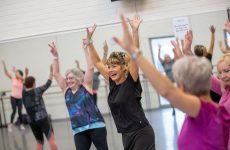 It's time to Make Your Move! 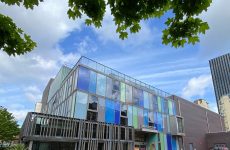